Most likely, Raid 5 is owned by businesses and individuals because of the fault tolerance feature it offers. Fault tolerance in Raid 5 gives the facility to continue using the system after it experiences failure.

Although, after fault tolerance disk failure, the rest of the disk in the array can be failed if the failed disk is not replaced immediately.

So, now, if you are about to attempt recovery of the Raid 5, you need to avoid these seven things that can put your data at risk leading to permanent data loss.

You might keep the system on while the Raid gets corrupted or fail, but it’s worsening the case. The more you keep a system on, the more Raid systems will tend to fail and overwrite data, making the data recovery success impossible.

When you see any message show up on your screen asking to “reinitialize internal disk,” tapping yes will make the case worse.

You would not know the actual cause of Raid 5 failure until a raid recovery specialist analyzes it. It could be any cause leading to Raid 5 corruption, so backing online the Raid system would be riskier and can compromise data. 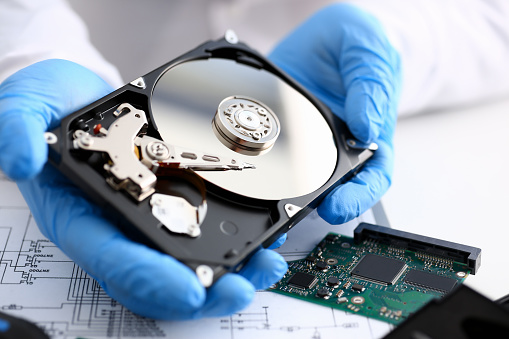 All hard drives in the Raid array are configured. Once the hard drive fails, Raid can run with fault tolerance, but not in case of more than one disk failure. The system will immediately shut, and in an attempt to replace the failed hard drives with a new one, you can experience corruption due to configuration issues.

Once the misconfiguration is triggered in Raid, you may attempt to change the configuration of the Raid, but it will result in entire Raid data loss.

Performing repair on the failed Raid hard disk with chkdsk is like killing a raid by yourself. It is a big no because running chkdsk on an already failed disk will relocate inaccessible files, leading to inevitable data loss.

Instead of recovering Raid 5 data with a data recovery tool, on the contrary, it will reverse the process and make it hard to recover files. Unreliable tools shouldn’t ever be used to recover Raid 5. It needs specialized skills and tools to recover the Raid array, which can not be achieved with any data recovery tool.

Raid recovery is not as easy as it may seem. Different raid configurations need different tools to restore failed disks, especially Raid 5 configuration, in which internal algorithm, structure and configuration of disks are different. Though, any raid level can suffer from failure. So, you must always be prepared with a reliable Raid data backup to initialize data recovery in the system or at least to access lost or damaged data during Raid 5 failure.

Why do 30000+ Customers Choose Techchef?

Techchef is made with ISO 27001 certified infrastructure, seasoned experts and the belief of its satisfied customers that makes us confident to deliver you best solutions. Our experts are two decades experienced in offering effective solutions for all complicated Raid configuration levels. Whether manufacturers, including Western Digital, Drobo, Citrix, Dell, etc., we have customized Raid recovery solutions for every Raid type, model, or make. With the commitment of up to 100% recovery success rates, we assure you the best data recovery service experience.

Visit us at our official website to learn more about our expert solutions for your Raid server recovery.

Kajal Aswal
Kajal Aswal is a creative content writer with her hands-on technical and marketing content. She has written thousands of content that have appeared in multiple blogging and content creating platforms.
how to rebuild raid 5 without losing data, raid 5 array be recovered if one of the disks fails, raid 5 failure, raid 5 recovery 1 failed drives, RAID Data Recovery, read data from single raid 5 disk, recover data from raid 5 with 2 failed drives